Are we seeing the return of regional Australia?

A few weeks ago, the first-of-three State of Origin Rugby League games took place in Townsville, a city of just over 175,000 people in North Queensland. Until that game, Townsville was famous for its James Cook University, its large armed forces base, its close proximity to the Great Barrier Reef, the spectacular Magnetic Island and of course, the North Queensland Cowboys Rugby League team. I am biased – I went to University there and can claim it was some of the best years of my life!

Until a few weeks ago, the State of Origin – a series which has been part of our DNA in Queensland and New South Wales since 1980 – had ONLY ever been played in capital cities. It used to be a dual in either Brisbane or Sydney, but in recent years, the National Rugby League (NRL) has seen fit to schedule games all around the country to satisfy rugby league fans all over Australia.  But not one game has ever been played outside of a capital city.

In the lead-up to the first game, a badly-timed COVID outbreak in New South Wales saw the NRL scrambling for a suitable replacement for the originally scheduled Sydney game. A few cities put up their hands, but rumour has it that the Queensland Government saw huge value in having the game played in Queensland, and paid handsomely for the privilege – numbers such as $8 million have been widely reported in the press. The fact that Townsville has a brand-new stadium, and has largely remained COVID-free, made it an excellent choice.

So, just two weeks out, the NRL, events managers, logistics and catering experts went to work. Queensland Country Bank Stadium has a capacity of some 25,000, and additional seating was trucked up the Bruce Highway to Townsville from Brisbane to fit a few more fans in. The fairytale would have been complete if the New South Wales team had stuck to the script, but they didn’t, and left the capacity crowd of maroon supporters quiet with a 50-6 win.

Rise of the regions

This story is fantastic (almost) on its own, but it also signifies a very interesting shift in Australia and the return of the regions. Perhaps the move to regional Australia is not limited to large-scale sporting events? Many of us long for a sea change, or a simpler life. Having realised that work can be done from anywhere, there has been a slow and steady shift out of Australian cities.

In February this year, realestate.com.au reported that sales volumes in regional markets grew by 20.3% in 2020, double the 10% rise in capital cities. 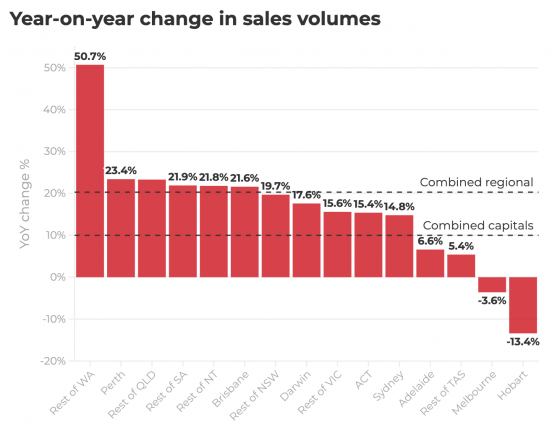 Net migration to Australia’s regions are highest on record, with Queensland among the most popular migration destinations. Extended lockdowns in Melbourne and Sydney have seen record numbers of people heading north, and not just to Brisbane. Regional centres all along the Queensland coast have seen their fair share of this migration with the Australian Bureau of Statistics estimating that in 2020, some 43,000 Australians moved from the cities to the regions.

There’s no telling what the future holds in this sense; whether people will decide to stay in the regions or eventually return to the cities, but in the meantime, regional Australia must be revelling in this opportunity to recover from a very hard 18 months of closures, lockdowns and isolation.

Tourism will recover, and while we hope that the next 12 months sees the return of international tourists, in the meantime, the rise of regional Australia – offering a reprieve from the challenges our cities face and a real opportunity for a sea change – will continue to be attractive to those who can, and really want to make the move.

Is Australia’s COVID vaccine messaging off?