With Zac Kirkup conceding that the WA Liberals are facing defeat, and the overwhelmingly positive polls that have been published of late for Labor, it seems that the WA State Election is in the bag for incumbent Premier Mark McGowan.

Or is it? Following on from our #politicalbrands federal Labor and Liberal party videos, we produced several years ago, it’s worth looking at the branding strategies of the current campaigns.

Both campaigns are well designed and feel consistent. Even driving through different electorates, it feels like local members of both major parties are using the brand well.

Labor quite often leverages the popularity of its leaders in its branding. Currently, when searching for ‘WA Labor’ on Google, Mark McGowan’s homepage is, through Google AdWords, paying to appear higher than the official WA Labor homepage. On their social media channels, there are no key messages to be seen, just a picture of Mark McGowan at work. Mr McGowan’s popularity has soared of late, even to sex-symbol status, and it makes sense for the WA Labor brand to leverage this. He even has a “my story” video, which tells the background of WA’s current, favourite premier, and why he loves the State so much.

Figure 1: the cover image from the WA Labor Facebook channel

From a glance at their Facebook feed, Labor has posted 28 times in a 16-day period, with a 72% positive messaging, and 5% negative messaging about Liberal policies, and the inexperience of Zac Kirkup. But this is not truly indicative of the whole campaign. 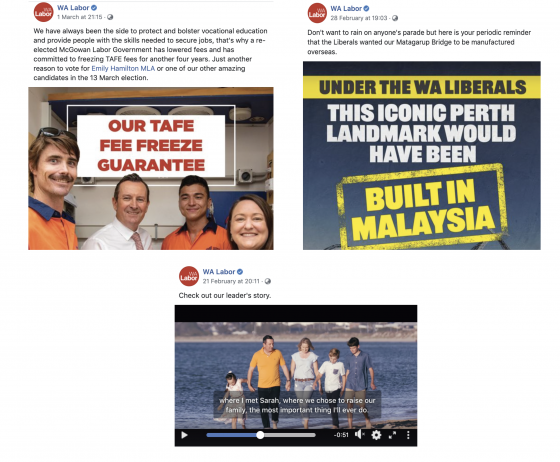 Negative campaigns don’t feel good, and it’s not a great look. So, how do you talk about the negatives of other political parties, without looking like you’re running a negative campaign?

Create a brand with almost no brand connection to you, that you give the task of being negative. “Don’t take the risk” is a highly targeted, customised brand page that targets local electorates with customised messages and images of their local Liberal MP or candidate. It has no Labor branding, or colours – and looks distinctly separate to WA Labor, almost like a lobby group. The page itself has no record of any posts. It is a very targeted, advertising platform, which takes clicks through to whytaketherisk.com.

I think everyone would agree that spearheading the WA Liberal campaign was a tough gig for any politician, let alone one as inexperienced as Zac Kirkup. To top it off, the WA Liberal Facebook account was included in the recent Facebook ban, forcing him to reinstate his MySpace account, which created a bit of light-hearted, meme-based fun.

It’s been an unorthodox campaign in many ways. In general, Mr Kirkup has used social media to his advantage in being more accessible and personable, and obviously engaging himself on the platforms.

Mr McGowan’s accounts feel professional, but it doesn’t feel as if he is posting himself.

The Vote Liberal Locally, seen on their Facebook cover image, seems like a weak headline and feels lost in comparison to Labor’s messages. It’s an attempt to gain Liberal votes though encouraging voters to support their local member or candidate within their electorate, shifting the focus off the leadership contest.

The WA Liberal Party website is much more focused on policy than the person of Zac Kirkup, which has been a stalwart of Liberal brand strategy for some time.

The WA Liberal Party campaign has featured newspaper headlines, criticising the Labor Government on various issues, and has contrasted policies directly, in a critical way, and has also tried to leverage some of the goodwill felt towards the Federal Liberal brand.

They have also been prolific in posting – four times as many posts as Labor during the same 16-day period. Their campaign has more negative posts (around 20%), but they are less targeted towards individual MPs, and stick more to policy.

Early on in the campaign, negative messages focused on policy problems and failures, but has now shifted to warnings about what happens when one party has power in both houses of parliament. This might sway some “Labor is going to win anyway” voters back to voting Liberal. 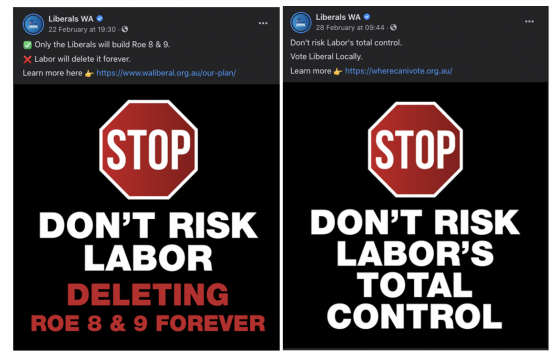 Nostalgic messages, around the 25-year anniversary of John Howard’s election and a reminder to those who still remember about the Brian Burke scandal are odd choices for content – but fit with his optimistic video appearances stating “How good are the WA Liberals!” Perhaps optimism is hard to come by in the face of a potentially significant loss to a rampantly popular Premier?

The polls are not tight, but they have been wrong before. Will the decision to personalise their negative campaign make WA Labor feel more negative? Will WA Liberal’s decision to concede the election, and change messaging mid-campaign save any seats? We’ll soon know – whoever you plan on voting for, don’t forget to vote whether you do it early, as many are, or on election day Saturday 13 March 2021.