The damage to wine labels of knock-off brand lookalikes is significant – both for sales and reputation. But the trade in Australian counterfeits is booming, writes wine expert and Cannings Purple corporate affairs account manager Ray Jordan.

Wine counterfeiting is big bucks, both for those cashing in through such deceptive practices, and those trying to stop it to protect their brands.

The culture of the knock-off has been refined to the point where people happily pay a fraction of the real price in the knowledge that what they are buying is fake – but who really cares if it looks the same. In fact, you could argue there is little point in owning a real Rolex or Tag Hauer, as no one will believe it’s the genuine article anyway.

But for the wine industry, there are additional, far more sinister issues about counterfeiting that makes it essential for producers to make it more difficult for counterfeiters. Stop it, never, but at least reduce it.

In the main, people who buy knock-offs would not be able to buy the real thing. They buy knowing they are copies and happy to have the item because it looks good. But many people who buy counterfeit wines think they are genuine and are simply getting a good deal. Many don’t really understand wine and would have no idea whether it’s a good drop or vinegar.

But retailers know what they are dealing with.

In one shop I visited in China, I started to take a keen interest in what I was convinced were fakes – perfectly labelled older vintages of Penfolds 707 – in a condition that was just too good to be true.

An hour or so later when I returned to investigate further, they had been removed from the shelves by the shop owner who had seemingly been sitting nonchalantly behind the counter showing no interest in me.

In an unsophisticated market, it can be argued that the damage of selling inferior quality wine in fake bottles is minimal and in fact could increase brand awareness. But as that market becomes more sophisticated, consumers will start to appreciate when a wine is of poor quality and turn away from the brand.

The scale of damage to big producers is significant, but for small premium producers it is vital that wines sold into new markets are protected from counterfeiting because they are mostly trying to develop a niche market where quality is even more important.

But there is still a more insidious problem.

At best, wine is being sold under copied Australian brands. At worst, approximations of these brands, through design, contain no wine at all. They are simply chemically manufactured fake wines.

For example, what happens if someone becomes seriously ill or dies from drinking one of these wines?

The damage to the individual brand, and even to the broader brand Australia, would be massive. The cost to reposition and recover brand integrity would be similarly huge. It is conceivable that the damage could be terminal and the investment in building the brand in the first place, lost forever.

Counterfeiting wine is a big and lucrative business with increasingly more sophisticated methods able to replicate famous brands overnight. High profile brands are targeted because the profit is considerable. Official data says around 20 per cent of all wine sold globally is fake. Unofficially the figure is higher still.

In Taiwan in February, 160,000 litres of unfinished wine mixed with grape juice was found by authorities, ready to be labelled as Argentine wine and marketed for up to $61 a bottle.

The classic example is the fact that more Chateau Laffite 1982 has been sold in China than was ever made at this famous First Growth Bordeaux chateau.

Counterfeits use the original label, artwork and trademarked name, but the name and logo are aged slightly to look like the original. It’s different enough not to be a counterfeit, and yet still fool consumers.

The inability to read French or English makes it even more difficult for some new, unsuspecting buyers.

Today, high-end restaurants, hotels, collectors and auction houses regularly smash empty bottles after consuming them to avoid their re-entry into the marketplace.

One of my close contacts in the Asian wine trade told me that as he watched a shipment of wine being unloaded, he was approached by someone who offered to double the consignment overnight – obviously with cleverly faked bottles.

Big companies such as Penfolds, which exports huge volumes of wine, spend big dollars on protecting their brands. Of course, they have a lot to protect and much to lose if their brand is continually compromised by counterfeiting.

A few years ago, I managed to get hold of a bottle of the famous Penfolds Bin 389 bought through retail in China.

The label design, the size, the colour, and even a fine laser etching code on the bottom all indicated that this was the real thing. Except it wasn’t. It was a very clever fake: one of millions that are sold through retail stores, and which in this case cost the equivalent of about $80. The genuine articles generally sell for about $150.

I was pretty sure it was a fake, because on very close examination there were subtle differences on the label. The ultimate proof was in the tasting in which I put it up against a locally bought, genuine article.

The wines were tasted blind and there was little doubt that one was inferior.  There were other differences too, such as the colour of the Penfolds name being slightly different, the label edges a little too sharp, the laser etching very faint, and the quality of the paper inferior.

Later, the wines and the bottle were taken to the UWA Centre of Forensic Science which confirmed that the wine bought in China was different from the one bought here. The test indicated the fake wine was probably a blend of Australian wine (most likely wine concentrate) and wine from another country.

The lessons are clear for wine producers. When entering an emerging market, a relationship with a good distributor and local contacts is essential, as is following the advice of Wine Australia and registering your trademark in that country.

Equally, it is essential to get advice on how to protect the brand itself. Brand and reputation are central to every business, and investing in ways to protect your brand will save money in the long run. 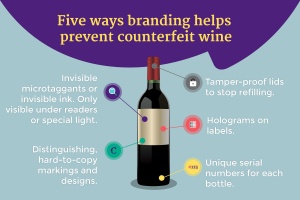 Ray Jordan is one of Western Australia’s most highly-regarded corporate communicators and strategists and was previously Deputy Editor of The West Australian. He has written about wine for the past 40 years – penning 22 books on the subject. Contact Ray.

Branding for the rest of us: B2C vs B2B

Is your brand accidentally trendy? Here’s our story

Six ingredients to a healthy brand