We’re all meant to be publishers these days, but it’s not unusual for organisations to be a bit bewildered about how to go about creating content, or what it should be. Cannings Purple Director of Design and Digital Jamie Wilkinson considers a good case study on how to get it right.

Content and distribution are easy enough if you’re Nike or McDonalds, or some other global consumer-focused business with a hyper-recognisable brand – but what if you’re a bank, or an exploration company, or in the health and aged care sectors? How do you create and distribute engaging content if your focus of work is a little more… sober, or less exciting?

Enter the Office of the Australian Information Commissioner (OAIC).

For those who don’t know, the OAIC is the independent national regulator for privacy and freedom of information. You don’t get much more sober than that! But that doesn’t mean they aren’t absolutely on it when it comes to their content and distribution strategy.

Take the Australian Community Attitude to Privacy Survey (ACAPS). The title itself isn’t the most enticing, but let’s take a look at how the OAIC has distributed a really important piece of work, and how they’ve made quality content to get people to find out more.

Producing a report like ACAPS is an expensive exercise. Clearly, the research and production of the report itself is hugely important because without the content, there is no report – but the reality is that the way you expose people to its findings, entice them to find out more, and ideally download and read the whole thing is just as important.

So, how has the OAIC approached that challenge?

Well, I was made aware of it by email. I have an interest in this area, so I’ve signed up to their email list, ensuring that when there’s something of interest from the OAIC I’ll see it. Email is much maligned, but it’s still one of the most effective forms of targeted communications you can use – if an email is ever going to be read, it will most likely be within 90 minutes of sending. However, text messages still win on this front, with 90 per cent of them being read within 3 minutes.

But the OAIC didn’t stop with email. They recognise that people consume their information through a variety of other platforms, which is why they also launched the report on their social channels. And sure enough, when I looked at LinkedIn this morning, I got a second hit of OAIC content goodness as their post regarding ACAPS appeared in my feed. It’s important to consider which of your stakeholders use what platforms, and the OAIC also uses Twitter and Facebook to distribute their content. There’s probably little appetite for this sort of information on Instagram and TikTok, so they’re putting their efforts into the platforms most likely to give them a return on their time investment. 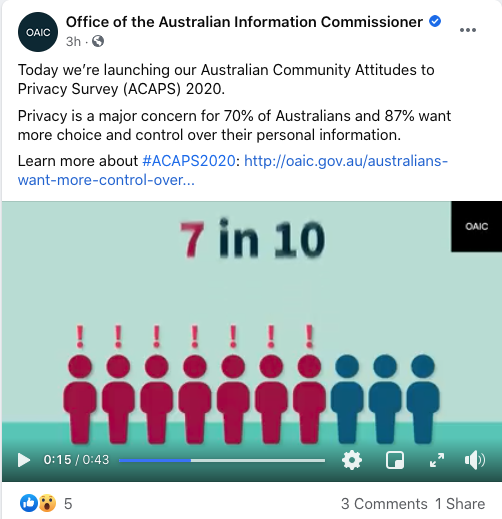 As an aside, it’s worth noting that the video content they use on social channels is native to the platform. That means that rather than sending people off to YouTube to watch the video, it’s been uploaded into the individual platforms. This is beneficial because it means they will play automatically in newsfeeds (which will encourage engagement) and the platform algorithms will likely prioritise their exposure because they will encourage people to remain within the walls of those platforms longer.

As a government entity, it’s likely that the OAIC website is highly regarded by search engines like Google. This gives them a distinct advantage, but any organisation can build their ranking by making relevant, regular and quality content available on their website.

A quick search for “OAIC privacy report”, a fairly generic term, shows that Google is already ranking the report in their news section. When using the more targeted search term “OAIC ACAPS”, the relevant page is already the first result.

Finally, the OAIC has also uploaded its overview video about the report to YouTube. This is smart because YouTube is the world’s second largest search engine behind its owner, Google. That improves discoverability and helps build their search engine optimisation (SEO) credibility as well.

There will of course be other activity going on to promote this report – media engagement, and possibly some paid social and search ads – but in terms of return on investment, what they’ve done is probably optimal in terms of distribution. 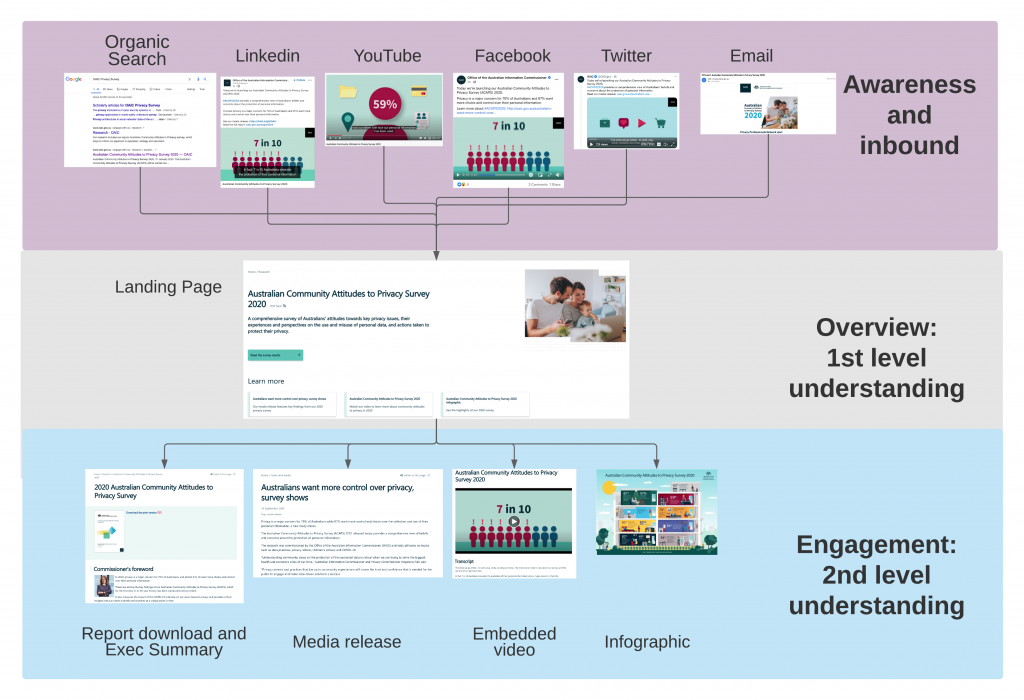 Next, the really smart thing they’ve done is have all of these different distribution tactics ultimately point to the same place: the report landing page.

A landing page is a single, highly-relevant web page, which is where you should be sending all your interested stakeholders. It should use language and visuals which reflect the content your users have already seen on social/ YouTube/ email. This makes it more likely they will feel connected to the content, as it aligns with their expectations.

If it were me, I’d have used UTM tags for all my distribution links so I could track which platforms were working best in delivering me a relevant audience.

By moving interested users to a landing page you own, you’re in a position to better offer additional relevant content to them; you have more control over what they see and where they go next; and you have a better chance of attracting them to sign up to your other communications.

From the landing page, the OAIC is then giving its interested stakeholders other options to get deeper and more detailed information. It’s like a funnel with the widest audience happening at the top, getting the greatest exposure, and narrowing as users get more interested in the topic.

Most businesses can use this tactic for any announcement or news release. Think of the benefit of a listed company using a video of the CEO and a landing page to communicate the high-level headlines of an annual report for example. Not everyone will read a 90-page formal document, but many more will hang around to get the headlines.

So, for those who are quite interested, the OAIC makes an infographic available, or you can watch the video if you haven’t already seen it. They make the transcript of the video available – which will, again, improve their SEO rankings for this topic as search engines will be able to understand what the video is about via the transcript – and there’s also the media release to read, which gives a little more information. But for those stakeholders who are very interested in the topic, they also make a synopsis of the report available, including the Executive Summary and the key facts. And then for those who are really, genuinely, very very interested, you can actually download the full report (all 121 pages of it!).

I guarantee that this method, which does take more effort and time, will deliver significantly better engagement, downloads, and interest than if they had just tweeted a link to the full report. It’s a smart distribution and content strategy, and it’s great to see government organisations working so hard to encourage interest in their work.

How could this distribution strategy have been improved?

There are still things which could be improved to fully maximise the effectiveness of the distribution. In fairness, at the time of writing the report had only been live for two hours, so it’s possible this stuff is coming – but here are my thoughts on how this campaign could have been taken to the next level:

Jamie Wilkinson is Director of Design and Digital at Cannings Purple.