Showing to tell – visual storytelling and The Gibb Challenge

Show don’t tell is often cited as the ‘golden rule’ of writing. Whether using active voice over passive, expressing emotion through action, or practicing economical writing, a good writer employs a carefully honed bag of tricks to help you ‘see’ what you read.

In essence, it is all show. The challenge becomes – how to tell the story.

While strong written communications are vital, the addition of a visual and video-based arm to tell your story has never been more important.

From Derby in the West Kimberly to El Questro station in the East Kimberley, The Gibb Challenge is a gruelling five-day cycle challenge that pits riders against one of WA’s most iconic roads to raise money for a charity of choice.

At 5am, 16 May, more than 350 riders and support crew converged on Derby’s Spinifex Hotel before sunrise. The main beneficiary of the 2021 Gibb – the Royal Flying Doctor Service’s (RFDS) – CEO Rebeca Tomkinson started the stage.

The first day was a gruelling 220km leg into headwinds, over corrugations and through a seemingly endless red dust cloud.

Event Director, Simon Rimmer said, “There are two certainties about The Gibb…distance and dust”.

Each pedal stroke found a bit more purpose on day two. The riders broke into distinct groups, and the leaders broke away. None so much as Tony Thomas, a 50-year-old soloist who completed the stage more than three hours before his closest rival.

The challenge of filming was also one of distance and dust. The stages run over long stretches of featureless red dirt track. Each team has at least one support vehicle following, and each one can be many kilometres away.

As with writing, there were a few tricks to employ. The first was to carefully plan, drive ahead, and set up shots wherever possible, to show the highs and lows. 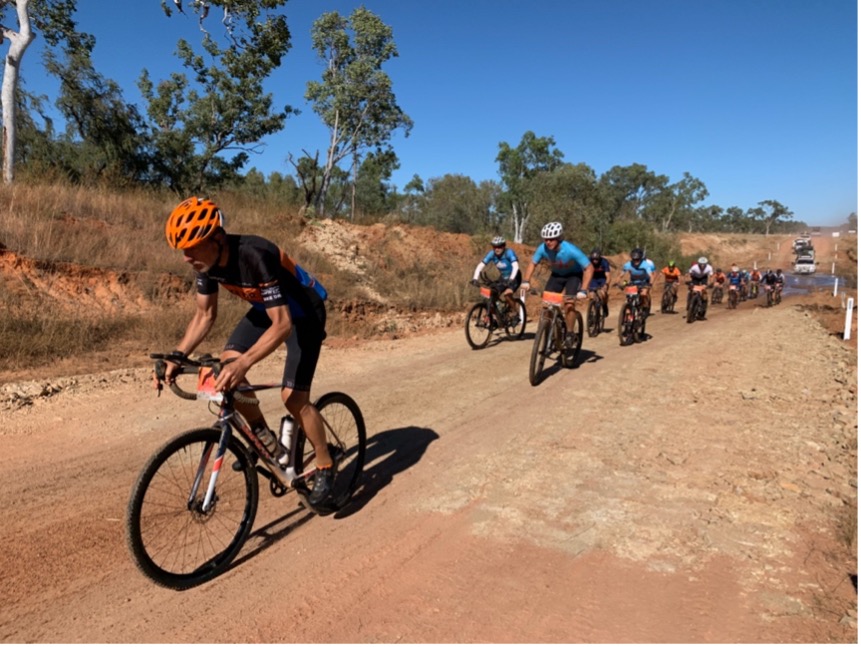 The Gibb Road is harsh, barren and long. The river crossings, swimming holes and gorges are spectacular, are but few and far between.

A non-descript sign in a pull-over leads to a dirt track, and a stagnant pond gives way to a rocky outcrop which opens into Galvin’s Gorge. 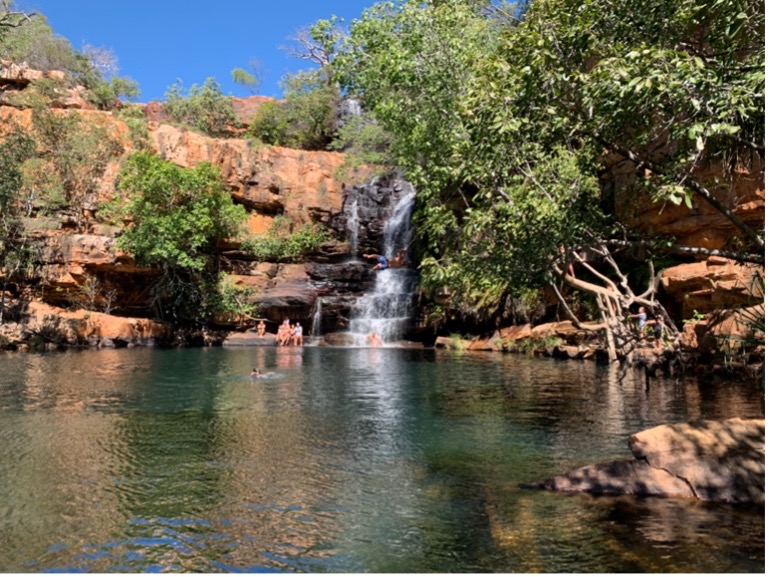 A Gibbster on the rope swing at Galvin’s Gorge

Unlike print, where the story is captured at the keyboard, visual media happens in the moment. The element of timeliness is both literal and immediate.

No amount of detail on a shot list compensates for the missed shot. You cannot re-create a flock of cockatoos flying in tandem with a team of riders, or a hawk fighting a brown snake on the road.

For every great shot taken, there are a dozen missed. The trick is to keep rolling.

If The Gibb Challenge is the context, the Gibbsters are without a doubt its flavour.

‘Bunts on Kikes’, the ‘Corrugated Coits’ and ‘Gears and Beers’ were among the standout team names.

Each rider is encouraged to raise a minimum of $1000 for the challenge, and this year the Gibb raised more than $560,000 for the RFDS with donations continuing to flow throughout the event.

Since his first trip down the Gibb River Road in 2007, Simon Rimmer and his army of Gibbsters have raised more than $8 million for various charities including the Police Legacy, the Kyle Andrews Foundation and the RFDS. 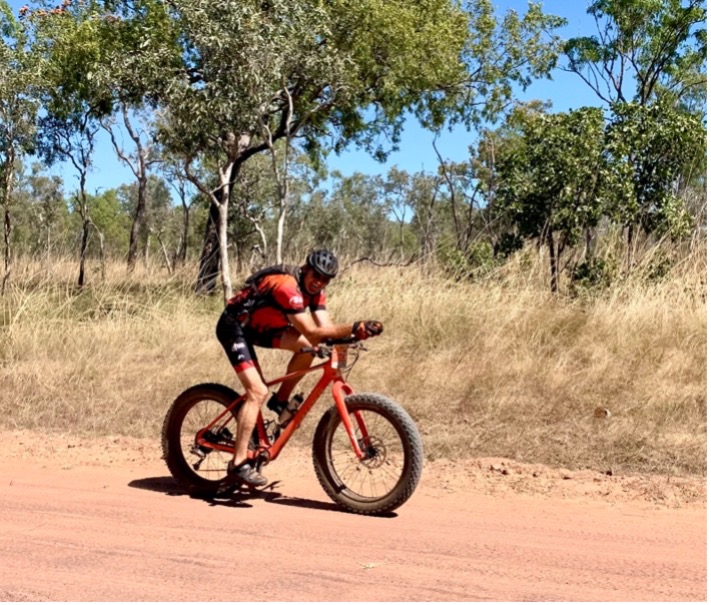 In print, one of the best ways to ‘show’ is through quotes. In visual media, this is equally true. The on-camera interview is one of the most powerful ways to convey your message.

The Polman family have called on the RFDS twice as two of their children, Bec and Jude, broke their right femurs on separate occasions. Without the RFDS, both children would have had to be driven many hundreds of kilometres to regional hospitals ill-equipped for the specialty surgery required. 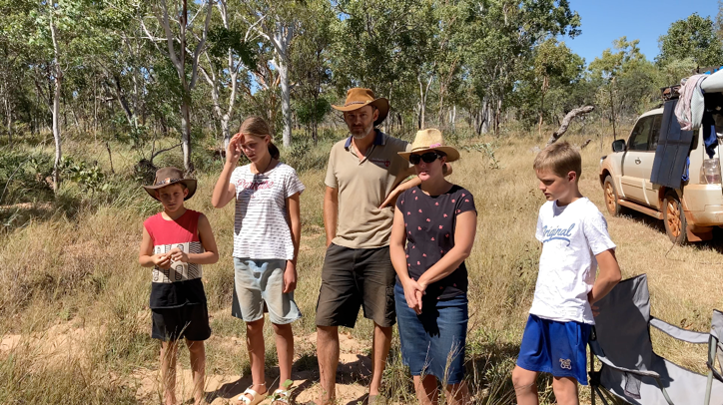 Elenbrae Station manager Logan Walker made an airborne trip to the hospital that most likely saved his life. Sitting under a gumtree with two camp lanterns for backing light, Mr Walker summed his accident up perfectly, “Akubra don’t make motorbike helmets.”

For him, like many other young families, remote living would not be an option, “We’ve got a couple of young kids, and without the Flying Doctor, we couldn’t live out here knowing there would be no help if something went wrong,” he said. 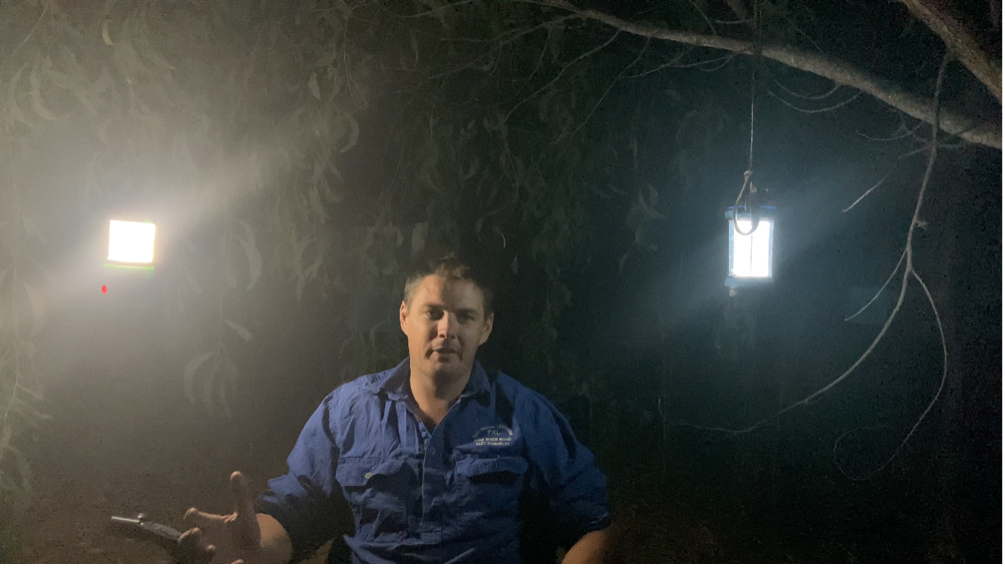 Putting it all together

Just like writing, the story comes together after the fact.

Keep the camera rolling, but edit on the fly. Anyone with a smart phone can shoot in high-definition, but the larger the file, the more space it takes up on your hard drive, and the slower it loads. Sorting and organising a mountain of unlabelled footage can be a nightmare. Organise and delete as you go.

Think about transition shots. Fillers and transitions are useful ways to tell the story visually. It is challenging but fun to think of these on-the-go, and is a great creative exercise. Maybe it’s a shot of someone tying their shoelaces. Maybe it’s a shot of a bike crash, or the station gate. These become the glue that stitches the main shots together and provide continuity.

When editing video, you get what you pay for. Video editing is a long, sometimes tedious and a very time-consuming process. To put together a short clip can take many hours. Exporting, rendering, and making rounds of changes compound the time taken exponentially. And to finesse footage into something professional takes may years of experience. Hiring an experienced video editor can make or break your creative project.

From developing the storyboard, managing and undertaking filming and editing, to developing distribution and amplification strategies, Cannings Purple’s team of videographers, voiceover artists, scriptwriters and content specialists will guide you every step of the way.