The secret to a great speech

A lot of words have been written about writing and making speeches – probably far too many, but here are a few more. In fact, there are probably more secrets to giving great speeches, than Burgess, Maclean or Philby ever passed to the Soviets during the Cold War.

Most have been developed by professional communicators based on years of experience, both practical and observed, and will contribute to the preparation and delivery of a good speech.

Many are to do with how you perform on the stage, the development of the content and engaging with your audience, with technical tips such as how to use your voice effectively.

I’ll summarise my own list of what I consider the most important tips. But before I reveal those worthy pearls of wisdom, let me cut to the chase.

Think of the times you have sat through a lengthy diatribe, overloaded with verbosity, repetition and vagaries that have you wondering if there was a point to the speech. Think of how your mind starts to wonder with lack of interest to be replaced with more pleasurable thoughts of what awaits at the weekend.

But think too of those occasions when the words were delivered with such confidence, poise, and engagement, often punctuated with a little wit and dramatic effect, that you felt they ended just as you were getting interested.

These are the speeches that have impact. They are often not filled with excessive detail, but they carry an overriding message that is clear…and memorable.

I have a confession. When a speech is bad, I find myself editing it in my mind on the fly. I get angry at the unnecessary waste of my time, and then frustrated that just when you think the speaker has finally reached a logical point where it could all end and I could be put out of my misery, they start on another tack that eventually reaches the same conclusion but wastes a further five minutes.

So, if I can distill all the secrets on great speechmaking to just one, it would be brevity.

Great speeches do not have to be long. In fact, some of the greatest words ever uttered were delivered in speeches that lasted not much more than five minutes in some cases.

Think of the famous Gettysburg Address delivered on a battlefield by US President Abraham Lincoln in 1863 during the American Civil War – it was just 284 words long. But so profound, so cleverly structured, and so precise, that those words are remembered more than 100 years later. 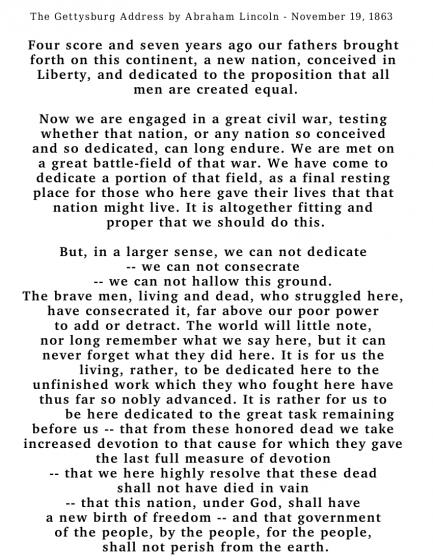 So why is it that a relatively short speech can have such an impact. Perhaps it’s like a boxer – a short jab has more chance of finding its mark and scoring points than a wild haymaker delivered more in hope.

The short jab is precise, accurate and effective in finding the target. The wild punch thrown from the bootlaces sails wide of the mark…just wind and wasted effort.

When you are to deliver a brief speech, every word counts. In fact, the process of distilling your key messages into words that have impact can be as time consuming as producing a waffling 30 minutes.

And each time you go back to it you find more ways to refine and focus the core message, through the elimination of verbiage or the creation of a punchy phrase that may well become the essence of your speech.

Think about Gough Whitlam’s “It’s Time” speech, or Lieutenant-General David Morrison’s “Get out” speech, and Julia Gillard’s “I will not” Misogyny Speech” speech. In many ways those catch phrases became the speeches.

But why were they so memorable and why did they have so much impact? Well, there’s a little trick that gives those phrases even greater meaning and punch.

They are repeated throughout the speech. By punctuating the speeches with rhetorical questions, painting verbal pictures, or creating scenarios, allows these words to be used in response.

And this is effective, impactful repetition of key words that is quite different from the waffly type I mentioned earlier.

The questions or scenarios are different, but the response is the same.

In essence, the speech is saying there are so many reasons why ‘it’s time’, or you should ‘get out’, or ‘I will not’.

All the other words of the rest of the speech are captured – and remembered – in those few well-chosen words.

So, in short, keep it brief to make a lasting impact.

Engage with your audience

Before you start, make sure the lighting is good and that the audience can see you clearly. That will make it far easier to move your eyes across the room and engage with each section of the audience rather than locking in on to one person.

Learn how to use your voice with simple techniques like slowing down to hammer home a point, or a brief pause to let the point sink in and create even greater impact. It’s a good idea to mark these points on your speech notes.

Use your own gestures

Avoid unnatural gestures. Many people have speech coaching and unfortunately, they can become somewhat stilted and unnatural which affects their delivery. But be careful if you have natural gestures like moving your hands around a little too much as these can distracting. Learn techniques to keep them under control.

Speak in your voice

If you have speeches written for you, make sure they are written in a tone, style and in words that are you. Obviously, you need to be comfortable and believe in what you are saying, but just as importantly you must feel comfortable with how you say, or you risk stumbling in delivery or not convincing the audience you mean what you are saying. If the speech writer can’t deliver what you want, then you should consider using another one.

Don’t tell jokes. Leave that to professional comedians. But you can use humour if it works within the tone of the speech. Be careful that the humour remains a subtle aside, a light story, a little irony, and is not dependent on a wild burst of laughter to be effective. There is nothing worse than an attempt to make people laugh falling flat.

Practise reading your speech aloud and doing a proper run through with key people to give you feedback. And reading a speech doesn’t mean doing it in your head. It means reading it aloud, so you get a good feel for how it really sounds and on the time it takes.

And remember, if you have done all the hard work in preparing the content and practising the delivery, try to remember that you most likely have a good story to tell, so enjoy it.

People have come to listen to you so give them a good show.