The State of Local Social Report 2021

Social media might connect you with the world, but it works best when it is local.

Whether it is keeping you in touch with your neighbourhood, a way to find or promote local events or just a place to share a favourite café or walk in the park, social channels have become the public noticeboards and community groups of generations past.

But they are also the first place people turn for fast-moving issues and changing information, making them an important channel for agencies needing to speak to and mobilise a local community.

It’s because of these trends that local governments have moved into social media in a big way — with varying degrees of success.

At Cannings Purple, we are always looking to understand how communication is changing, and highlight best practice engagement in our community.

In our first State of Local Social report, we’ve done a deep dive into the social media behaviour of the 29 metropolitan local governments in Perth, looking at Facebook, Twitter and Instagram and their performance over the first six months of 2021.

To learn more about our findings, or to conduct a similar investigation of your sector and competitors, get in touch.

We also looked at the trends driving interaction. What makes a local government audience happy? What makes them sad? And what stirs them to anger?

The results of our first State of Local Social report show a sector beginning to flex its muscles in reaching audiences directly, a trend that can only become more important in the future.

The global pandemic has highlighted the importance of our local communities like never before.

Exposure sites are listed by suburb. Lockdowns limit movement to a couple of streets. Communities band together to promote nearby businesses and keep retailers trading.

And for local governments? It is a time to shine.

Never before has it been so important for this neglected tier of government to be able to communicate freely and quickly to constituents, whether it is in keeping them up to date with rule changes, highlighting risks, promoting local vaccine hubs or leading a hyperlocal economic recovery.

For some, the role of local first responder builds on experience in past crises — most often bushfires or damaging floods.

But for other councils, it is a role they are growing into as residents and business owners turn to them for regular, updated news.

WA local governments are not alone. A study by social scheduling platform Hootsuite has found across the world, local agencies are playing a more important role as a source of information, emergency response and news.

How do WA local governments perform on social media?

We’ve looked at the social media behaviour of the 29 metropolitan local governments in Perth, looking at Facebook, Twitter and Instagram and their performance over the first six months of 2021.

Here’s what we found.

When you ask local governments about their communications priorities, top of the list is engaging with constituents — but the form of that engagement has changed over time.

Given only a fraction of most ratepayers ever attend council meetings, local governments have tended to push messages to their public using other means. These include advertising in local papers, speaking to community media, putting notices on their websites, using signage or letter drops to get a message across.

But these approaches only go so far, and with the fragmentation of traditional media, it is harder to reach residents to keep them up to speed.

Now, Facebook is standard practice for virtually all councils in Australia, and certainly all metro local governments in WA. Twitter is almost as widely adopted, even if some councils limit its use. And Instagram is the fast-moving channel being used to capture the quality of life, events, businesses and people that local areas have to offer.

The old line that local government is all about rates, roads and rubbish is … rubbish.

These days, Councils are the central coordinating point for a vast array of ordinary services, from early learning to aged care, and every age group in between.

They are responsible for urban renewal and economic development, make decisions that influence where your kids can play sport or, and play a part in how simple it is for you to  how easily you can commute to work.

And — thanks to the pandemic — they are the new frontier for health.

The lockdown approach of most states in 2021 has been to restrict movement by local government area rather than shut an entire state, with Sydney’s restrictions on key council areas a good case in point.

On the one hand, setting lockdown or health rules based on local government area can seem a sensible way to organise the pandemic response on the ground, but without good council communication, new problems can arise.

That’s been a challenge for NSW, where changes in local government boundaries and mergers mean residents may not know which council is theirs — creating confusion and delaying an appropriate public health response.

The solution lies in better council communications, and social media is the channel of choice.

How do WA local governments stack up? Let’s start by looking at how many followers they have on Facebook, the leading social platform.

The City of Stirling leads the pack with 46,834, followed by Joondalup on 39,222. Perhaps not surprisingly, the smaller Towns tend to have fewer followers, with the Town of Cottesloe coming at 29th with 1017 followers.

It’s tempting to align followers with population, but it isn’t a perfect science.

On average, council followers on Facebook work out to about 30% of their population numbers, but there is a lot of variation — as low as 3% in Gosnells up to 79% in Fremantle.

On Twitter, the City of Perth outstrips the pack, with 110,550 followers while the Town of Bassendean (which hasn’t tweeted since last November) has just 76.

Just because someone follows your social media page doesn’t mean they hear what you have to say.

In fact, it is estimated that the organic reach of a post on Facebook was down to 5.2% at the end of 2020  — in other words, for every 100 followers you have, just five will see the post pop up in their news feed.

Without getting too technical, the Facebook algorithm will sift through the posts that could appear in a user’s feed, and then apply three ‘ranking’ signals:

For local governments, therefore, getting their message through means encouraging people to engage with a post, not just see it.

There’s a direct correlation between the number of comments and the number of shares, so councils that can keep the conversation going, get greater overall engagement.

But what if that engagement isn’t positive?

The good news for local governments is that most people are happy, most of the time. That’s why the like button gets the greatest workout on council social media.


The angriest residents live in the City of Serpentine-Jarrahdale — and the angriest response is surprising, with people reacting badly to a post about the Shire’s library services moving to Byford. Sixty-six people were angry about this, making this by far the most negative post across all councils. Serpentine-Jarrahdale also scored the second angriest reaction, this time with residents upset at the news two trailers were stolen from the local recycling centre. 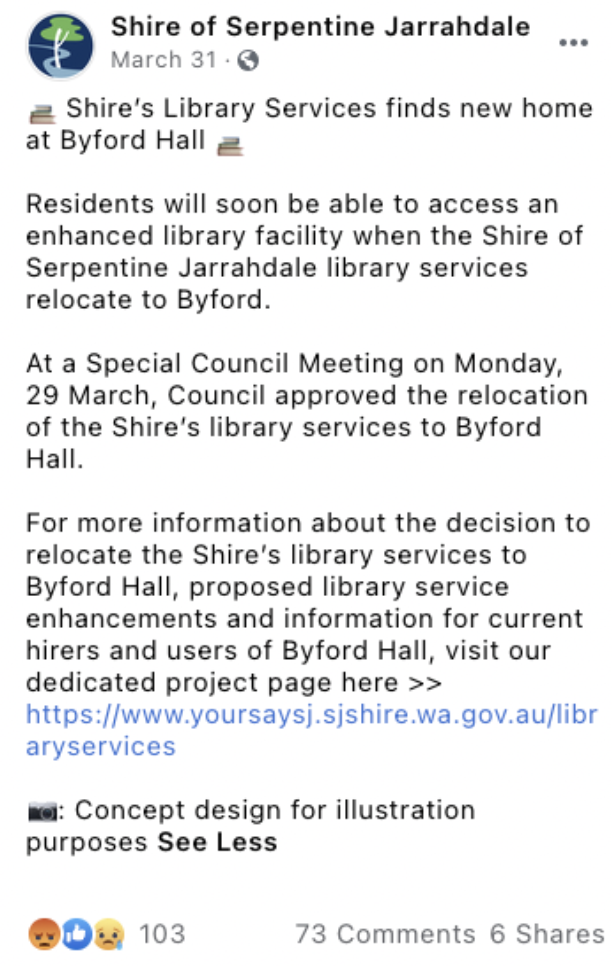 The most loved posts were from the City of Swan – both following the devastating fires that swept through the region early this year. 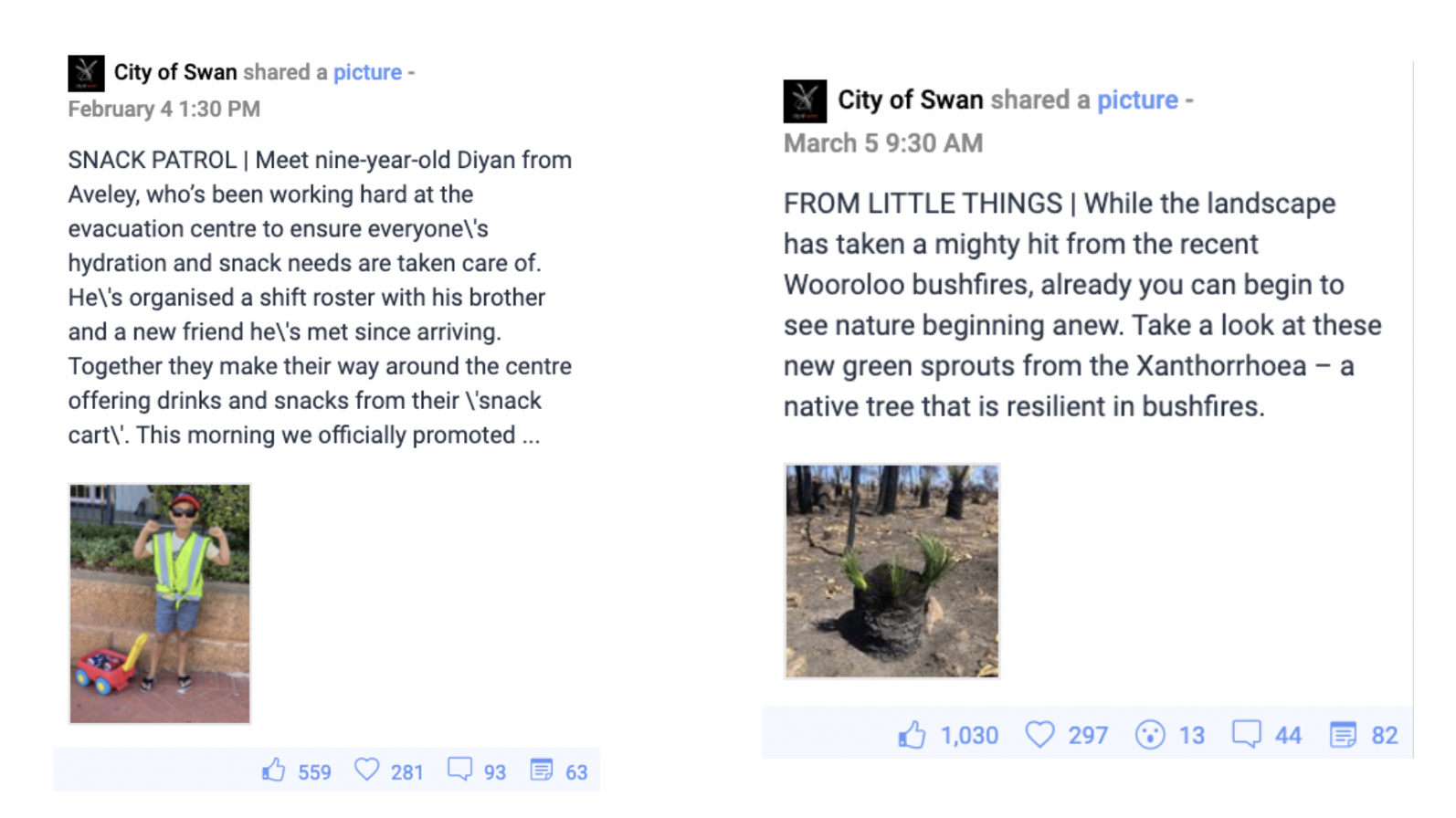 But the most positive post overall comes from the City of Cockburn, with more than 4600 reactions, 584 comments and nearly 300 shares of a video showing a rare tuna popping up in the Port Coogee marina. 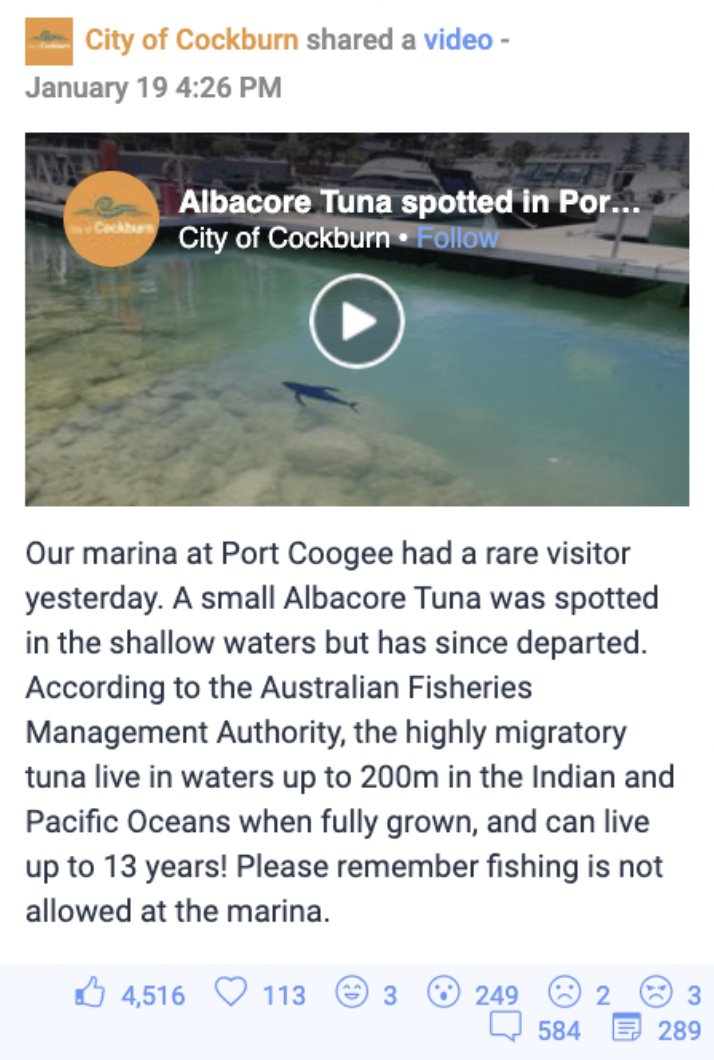 What are the trends to watch?

Although social media can hardly be counted as ‘new’ any more — a baby born the day Facebook launched is coming up to their 18th birthday — it continues to change. Here are the five trends we think local governments will need to watch.

People care what is happening around them, and the more they care, the more they set up groups that speak to that need. Local governments are part of that answer, but their competition for eyeballs is coming not from the State or Federal tier but sub-local groups: community pages at the suburb, land estate, street or even apartment level.

The challenge for councils: having an ear in the right forums without being perceived as intruding, and accessing the extra resources to be everywhere at once.

The role of Federal Governments is constitutionally defined, and State Governments get almost everything else, but the responsibilities of local governments can flex as far as their budgets and State legislation allow. For ‘customers’ (read residents) that means expecting local governments to play a greater role in making areas more liveable and attractive. For businesses, it means supporting local economic development — everything from attracting workers to the region to promoting individual businesses.

The challenge for councils: using social media to tell the positive story of their patch and build a local brand — without over-reaching.

The workings of councils are a mystery for most and the first many residents rub against council issues is when they need something, whether that’s renewing a dog licence or trying to find out the rules around running a business from home. Most councils still channel these queries and requests through their physical presence, although more are adding online options as well. In every other part of life, though, customers expect — and get — full service through social media.

The challenge for councils: scaling financial services and customer enquiry support via social channels without taking on more than they can handle.

Lizard people, satanic cults, flat-earthers, a global plot to force people to wear masks — social media is a mess of cockamamie theories and notions. Normally, these can bubble under the surface without causing issues, but the rise of the Q-Anon movement and the combined pressure of a global pandemic has seen conspiracy spill into ordinary life. It has also seen a stark rise in the number of wild ideas that governments must manage or myth-bust on their social channels, not to mention a bump in the number of conspiracy theorists running for local government office.

The challenge for councils: unpicking and addressing outlandish claims without giving them oxygen — and managing the risk that some of their own councillors could buy into misinformation.

Closely linked to conspiracy, orchestration is the deliberate use of social media to inflame communities, manufacture dissent, create confusion or encourage others to take out their frustrations with real-world acts. Orchestration is more worrying than someone simply holding wild beliefs as it is deliberate and organised – like the ability of a shadowy group in Germany to sponsor hundreds of anti-mask, anti-vax, anti-lockdown protests around the world.  This is a complex area, on the radar for Federal Governments who see it as a potential threat to domestic civil order, but for local governments, the first time they become aware of this threat can be when they find themselves caught up in an orchestrated event.

The challenge for councils: monitoring, listening and tracking this fast-moving issue and explaining the potential risks to leaders who might themselves spend limited time on social media.

Get all of the stats in one place.

Think your brand is ready for TikTok?