There’s a lot of noise on social channels right now from people who are switching from WhatsApp to other messaging services. The move seems to be driven by the (wrong) assertion that changes in WhatsApp’s user policies mean the app will begin pushing personalised information about you to its parent company, Facebook.

Now, I’m not a huge supporter of Facebook’s grip on our personal data (or indeed what it has done with that data in the past), but the changes it is making do not mean your personal information will be any more compromised than it already is on WhatsApp – at least with regards to your personal messages.

The full announcement from Whatsapp is here, but essentially the small changes which are coming relate only to how businesses use Whatsapp to engage with their customers. Some of the information relating to customer engagements (such as logs of its chats) may now be saved on Facebook servers, which will of course, help Facebook better serve you with targeted adverts:

We want to address some rumors and be 100% clear we continue to protect your private messages with end-to-end encryption.
– WhatsApp (@WhatsApp) January 12, 2021 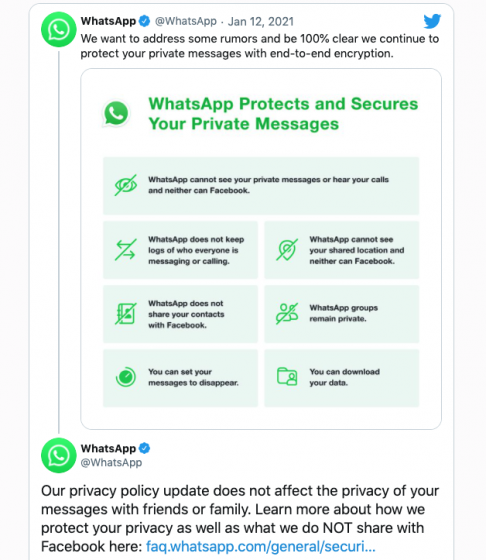 Facebook’s history of poor data management, along with swathes of misinformation on social channels, has seen many millions of people apparently switching to other messaging services such as Telegraph and Signal. Telegraph claims to have received 25 million new sign-ups in 72 hours. Signal has become one of the most popular apps on Android and iOS to the extent that its verifications systems have become overwhelmed.

But I would argue that you really don’t need to make this change unless privacy and the protection of your personal data is so important to you that you also opt out of Facebook’s other apps (facebook itself, messenger and Instagram), and only use the internet in “incognito” mode.

Whatsapp cannot read the content of your personal messages, does not listen to your calls, and doesn’t store location data or share contact information with Facebook. It’s encrypted pretty well, and I would say the privacy risk is offset by the fact that it’s used by so many of your contacts.

Signal is definitely more secure, and comes with additional levels of security, such as the option to route your calls through its own servers to hide you IP address for example, but if you’re still using Facebook, you’re already handing over swathes of personal data, so dropping Whatsapp won’t really improve your situation. The list of personal information Facebook, as a platform, holds about you is staggering, and any changes in Whatsapp’s terms and conditions is irrelevant if you are still a Facebook user.

Apple has made clear on its blog all of the different types of personal data “linked to you” that messaging apps running on iOS have. Forbes presented it in a nice graphic, below. As you can see, if you’re on Facebook, it really doesn’t matter which messaging app you use if privacy is your main concern because you’re still handing over buckets of personal information to Facebook’s machine. 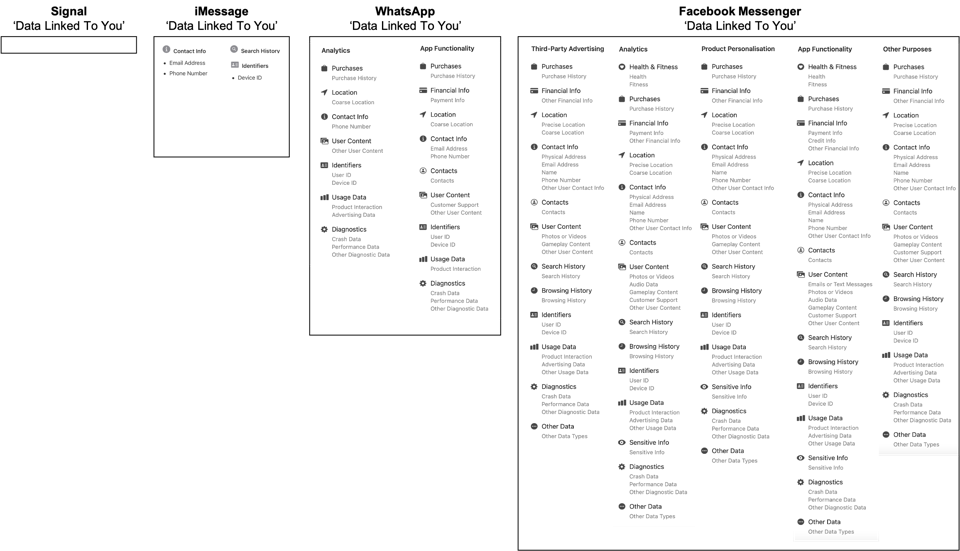 In addition, the very thing so many people are protesting about, has, for most people, been happening for most Whatsapp users for years. Unless you opted out (something which was only possible for a short time in 2016), Whatsapp has been taking (and passing on some) personal information anyway. For most of us therefore, Whatsapp already has some access to some of our data anyway, (phone number and profile name for example) and has shared this with Facebook for the purpose of ad targeting.

The intersection of free-to-use platforms, privacy, and the responsibility for publication is reaching a critical point. It’s a fascinating time for those interested in freedom of speech, privacy and data security, but what is clear for now is the only way to genuinely protect your privacy is to stop using just about all of these platforms.

Given the (misplaced) uproar, Whatsapp has pushed back any changes to its policies until they’ve had more time to clarify its intentions with its users.