In a Facebook post shared on Monday, and just moments before Apple CEO, Tim Cook took the stage at his company’s Worldwide Developers Conference, Facebook CEO, Mark Zuckerberg announced that it won’t take a cut of revenue from creators who make money on its platforms until 2023. 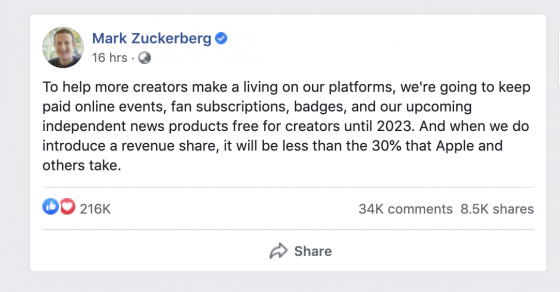 What this means is that Facebook will not take a cut of any revenue generated by paid online events, fan subscriptions, badges or its upcoming independent news product.

Zuckerberg also promised that when Facebook does start collecting a cut of revenue from creators, it will be less than the 30% that Apple takes.

Facebook’s promise to take no fees from creators until 2023, and more specifically, its dig at the 30% Apple “tax”, is part of a dispute between Facebook and Apple that has escalated in the past year.

Apple says its fees are necessary to maintain a safe app marketplace, however, that claim has been disputed, with some estimates suggesting that through revenue sharing, Apple makes billions in profit, far outweighing the costs needed to maintain the App store.

Is Facebook’s new payout interface another dig at Apple?

This new interface will show creators how different companies’ fees and taxes are impacting their earnings. 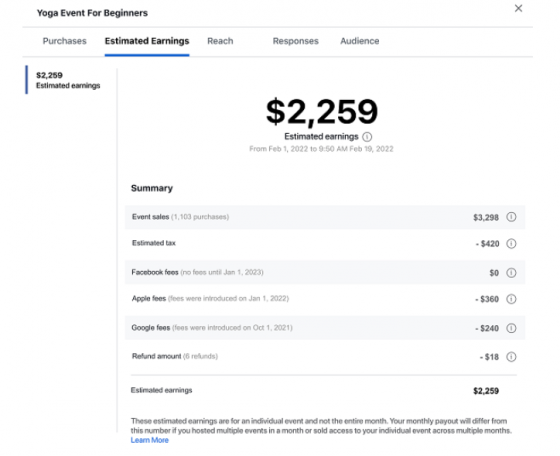 Aside from adding transparency, this new interface also looks like another way to re-direct anger towards Apple.

Zuckerberg wasn’t clear as to when the new interface would be launching beyond saying that there’d be “more to come soon.”

At Cannings Purple, our digital team grasps not only complex digital theory, but also has a depth of knowledge of platforms, integrations and solutions which make the roll out of our strategies more efficient and cost-effective. Contact our Director of Design and Digital, Jamie Wilkinson here.